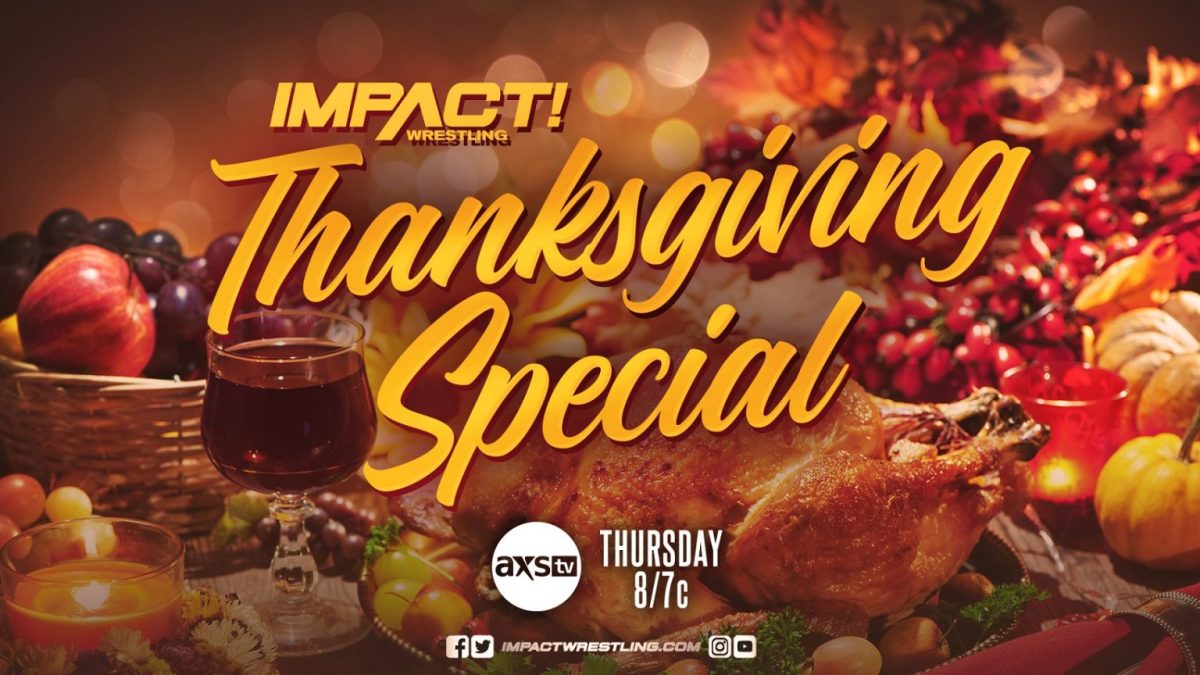 Thursday’s Impact Wrestling on AXS will look back on some of their most memorable moments.

Games include the 2007 Turkey Bowl which features Samoa Joe vs. AJ Styles vs. Chris Sabin and other Thanksgiving themed games over the years.

Josh Matthews and Gia Miller recap on Impact Over Drive and hinted at some of the things we’d be seeing on the Impact Thanksgiving Special this week before heading into a tag match.

Delirious started the match with Singh, screaming his gibberish as he alarmed Singh. Singh paid for not taking Delirious seriously, by eating a chop. Singh countered with a back elbow and distracted the referee, allowing Shera to choke Delirious and hit a clothesline to the floor. Shera joined soon after and continued his assault on both Delirious and Uemura.

Uemura made his comeback after some heat on Delirious, hitting a German suplex on Shera. The referee was checking Delirious, letting Singh and Shera double-team Uemura and hit a double team back suplex that looked pretty bad for the pinfall.

–Impact opened with highlights from the 2008 Turkey Bowl, featuring Alex Shelley, Rhino and Daivari. Rhino pins Shelley after a blood shot and Shelley had to wear the suit. The referee had his hand in the suit making his head bob as he tried to get Shelley to put it on. I laughed. Man, Russo-era TNA really sucked.

–A highlight video of current Impact stars aired saying they were thankful for various things.

–Deaner was with Eric Young and the goons were questioning Deaner about Eric Young’s defeat. I think. Young called it a setback and said they needed to go back to where it all began. I don’t know what all this means. Cryptic promotions suck.

–Angle’s 2007 Thanksgiving Dinner aired. This is an all time bad segment written by Russo. Eric Young entered and was forced to sit at the children’s table with Kurt’s daughter. Showing it right after Young’s scary and creepy promo is a choice. This was worse than I remembered, and then got even worse as more people showed up. This was not fun on all levels.

–A recap of Mickie James versus Taylor Wilde and Deonna Purrazzo’s challenge after the match aired.

–Robbie E and Grado meeting aired, and Josh Matthews in commentary reminded us that some of the best in Impact history wore it. This is not a good thing.

–A recap of Josh Alexander vs. Over Drive’s Frankie Kazarian aired, and Bully Ray’s subsequent challenge against Alexander and attacking his wife, Jade Chung.

–It has been announced that Rich Swann will face Bully Ray next week. The announcers then talked about their favorite Thanksgiving foods.

–Rockstar Spud’s 2013 Thanksgiving Dinner in the Ring aired. Somehow, it only gets worse. This was so badly scripted. Kurt Angle ruins dinner. No purchase~!

–An X-Division match recap from the Countdown to Over Drive show aired, with Rich Swann winning.

–Kenny King said he could have won the match instead of giving it to Swann, but he was more focused on Mike Bailey than winning. Well, that’s stupid, Mr. King. King called Bailey a cheater and wanted to expose him so he could win the title. Or, you know, you could just win the title by sticking it to him.

–Eli Drake’s Turkey Trot 2017, which was also a turkey dinner that was inexplicably at ringside like the last one in 2013. There was going to be a match and they would have to wear the turkey suit. This too was terrible. They started with tableside turkey dinner and then got into the game. Josh Matthews said, “This gives a whole new meaning to The Hunger Games” and I moaned even more. Chris Adonis lost and was forced back into the ring by security guards, 2 of which were played by friends of mine: retired marine wrestler Chip Chambers and referee Joshua Ruckstuhl (aka Referee Squishy). This is the highlight of the episode for me.

–Steve Maclin cuts a promo about Frankie Kazarian, saying the blow to Josh Alexander should have been his. This was good.

–The show concluded with the 2007 Turkey Bowl, which pitted AJ Styles vs. Chris Sabin vs. Samoa Joe. AJ lost to Joe. He was forced to wear a turkey costume. He sucked so much.