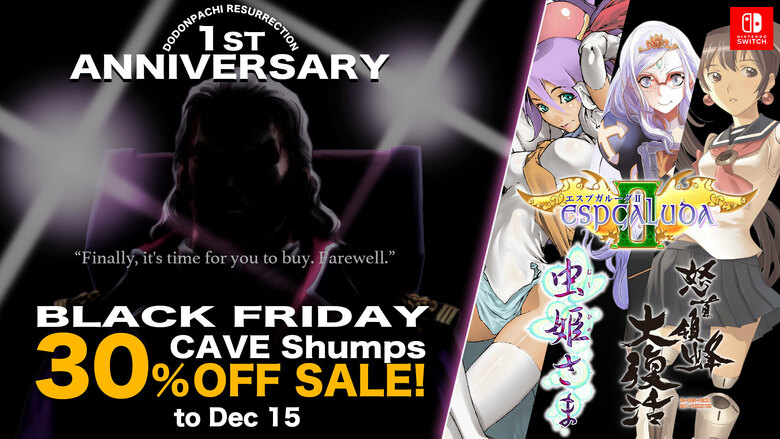 The vertically scrolling shooter game “Mushihimesama”, which gained popularity in arcades in 2004, is now available on Nintendo Switch. There are four game modes, including Beginner Mode for beginners, Normal Mode which plays the arcade version, Arrange Mode with enemy placement adjustment and game balance, and Ver 1.5. Enjoy the exhilaration of that period with Nintendo Switch. A vertical scrolling shooter set in a fantasy world with beautiful graphics. To save the clan from the mysterious plague, the protagonist Princess Reko goes to see “Koujujin” with Kiniro. She dodge enemy projectiles that only cover the screen, shoot huge bosses and aim to clear the stage. Each game mode comes with an original non-barrage mode with fast bullet speed, a maniacal mode in which a large amount of enemy bullets attack the player, which is suitable for barrage shooting, and an ultra mode with extremely hard difficulty. Aim for a high score in the game mode you are good at. Vibrant graphics, attractive characters, and most importantly, a beautiful and intense barrage. Live Wire Co., Ltd. is the first to bring and develop a popular title that competes for one or two in history

of cave shooting, which stands out in the shooter genre with many military themes, for Nintendo Switch. By collaborating with CAVE interactive, I am very fortunate to have the opportunity to experience time on a new platform. Like Mushihimesama, who released last time, we want to give new users the pleasure of avoiding and shooting through,” says HAL Nikkawa, head of promotion at Live Wire. The North American package version of “Mushihimesama” is now accepting reservations Pre-order sales of the North American bundle version of “Mushihimesama” currently shipping on the Nintendo Switch have begun.Limited Run Games, an American game publisher, is responsible for producing and selling the bundle version.

Six years after the end of the battle at Lunapolis… The headquarters of the “DonPachi” on the Moon felt a turbulence in space-time. As a result of their investigation, it turned out that it was due to a large amount of material transfer in the past. The culprit was Exy, a doll of the elements. She would have been abandoned in a runaway battle six years ago. The battle begins between Axie, who intends to rewrite history, and the army of DonPachi, who tries to prevent it. It will be set in Japan in May 2008. The world is once again engulfed in war. The sound of the bee’s feather hasn’t stopped yet!

■ A combat system full of exhilaration Select one of three models that are characterized by movement speed and type of shooting and sortie. Orthodox “Bomb Style” that can use bombs to counter enemy projectiles as they attack the entire screen The bomb barely fires, but “power style” that can arbitrarily change the power of the blow. And “strong style” that combines the two strengths. You can set the aircraft and shooting style to your liking. “Hyper counter mode” that compensates for enemy bullets as you power up your machine, We lead the battle to your advantage with the “laser counter” that nullifies the enemy’s laser.

■ Features * 8 modes for all DoDonPachi fans, regardless of skill level * Beginner mode prepared for beginners and arrangement mode prepared exclusively for the home version * Strategy spreading via “Hyper Counter” that compensates for enemy bullets and “Counter Laser” that repels the enemy’s laser * A battlefield with a sense of deja vu set in Tokyo in 2008 * Simultaneous recording of “Black Label” with the new system * Screen setting options that can be enjoyed in mode vertical