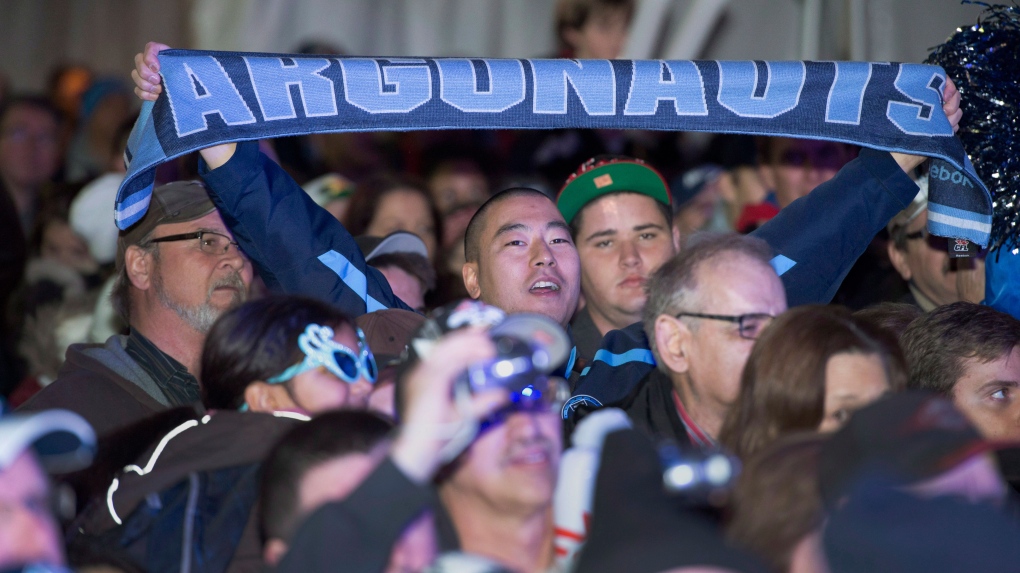 The Toronto Argonauts celebrated their victory in Sunday’s 109th game of the Gray Cup with a rally in Maple Leaf Square outside Scotiabank Arena on Thursday.

Roads were closed in the area and hundreds of fans were able to see Argos players give speeches and hoist the Gray Cup trophy.

“The special thing about this team is that we have been so resilient. But we get it from leadership that starts at the top and keeps flowing down. Everyone who played a part in getting us here today – thank you,” said Henoc Muamba, who was named Gray Cup MVP and Most Outstanding Canadian.

“There were so many people who said so many things earlier that week. And coach Dinwiddie and the rest of the coaching staff have instilled so much confidence in us. And we, from the very beginning, from when we landed at the Regina, believed we were the best team”.

“A lot of people probably didn’t think this was the right hire…look at us now,” Dinwiddie said.

“We try to build culture the right way and everyone is equal, we are all equal and we have a job to do. And he counts on each of us every day to do it. Many hours go into this that people don’t see behind the scenes.

Clemons also praised the many coaches, trainers, arena staff and other Argos employees who have helped the team along the way this season.

Muamba, who grew up in Mississauga, said he and his teammates didn’t listen to the many narratives surrounding the team leading up to the Gray Cup game that pitted the Argos against the two-time defending champion Winnipeg Blue Bombers .

Toronto led 24-23 in the closing minutes of the Gray Cup game when Muamba intercepted Blue Bombers quarterback Zach Collaros to drive the Argos to the Winnipeg 43-yard line with 3:20 to play. But Winnipeg’s Nick Hallett blocked a 37-yard field goal attempt to put the Bombers to their own 29-yard line with two minutes left.

Then, with less than a minute left, Canadian Robbie Smith blocked Winnipeg’s 47-yard field goal attempt that would have put the Blue Bombers ahead. Toronto got the ball at its own 14-yard line with 43 seconds left and was able to run out the clock for the stunning victory.

“What a crazy turn of events, isn’t it,” backup quarterback Chad Kelly said earlier this week.

Kelly replaced Argos starter McLeod Bethel-Thompson after he sprained his thumb early in the fourth quarter when Toronto trailed 23-17.

“I mean, at first we were like, ‘oh, we’re going to go up four’ and then the block and then all of a sudden they’re down to kicking for the win. And then there’s another block and you’re like, ‘man, this is unreal.’ But that’s exactly the way God wrote it. And we’re super lucky and super lucky to be on the winning side.”

Muamba told fans at the rally that many people thought Argos would not be able to handle Regina’s cold November weather and would struggle against the seasoned Blue Bombers.

“One of the other narratives that was out there, was we are from Toronto, it’s not cold here and by the time we get to Regina, we’ll be too cold…but what did you say, y’all,” Muamba asked his teammates.

“It’s not cold enough,” they replied.