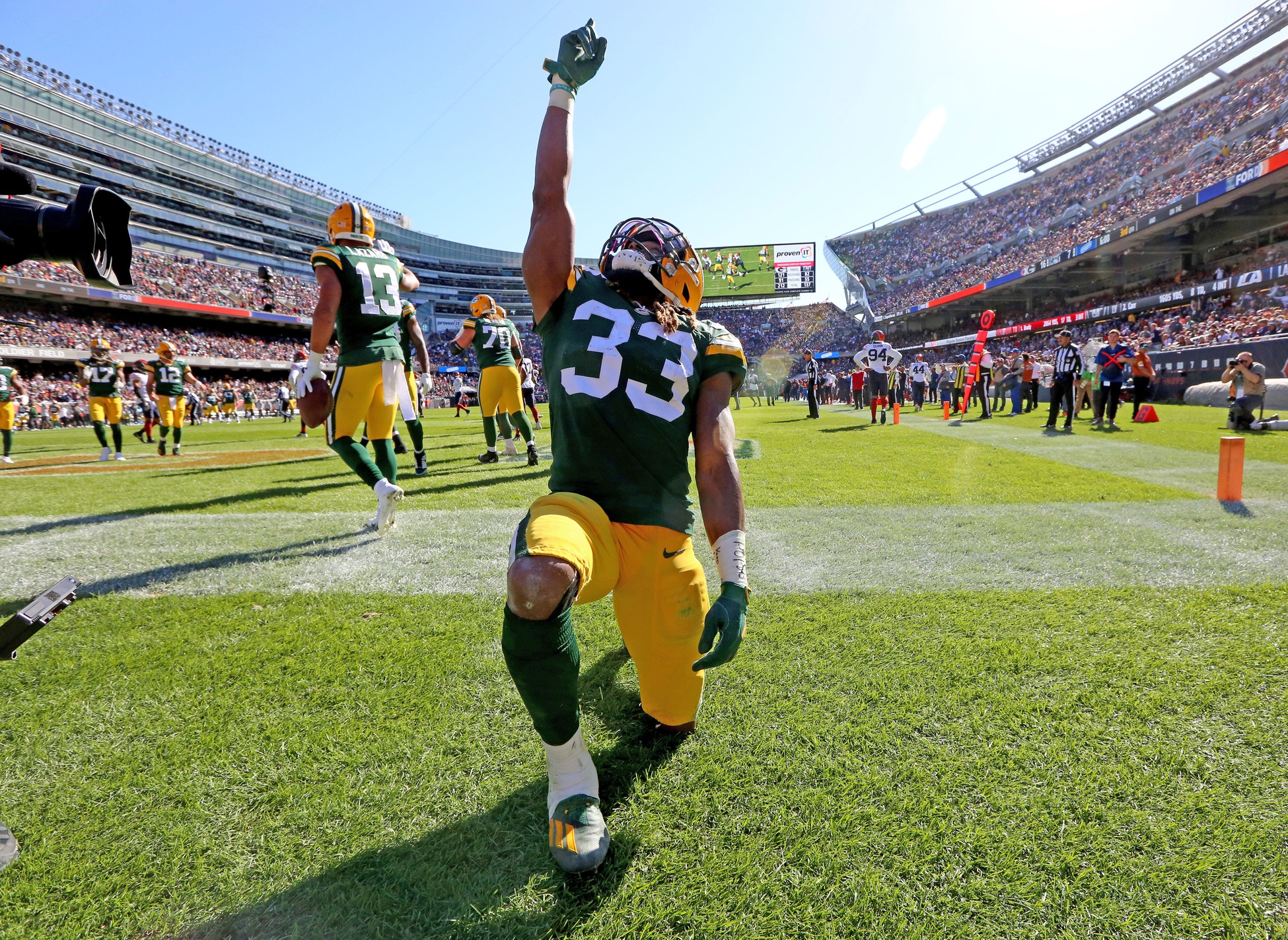 The Green Bay Packers offense has been inconsistent this season and has struggled to put up enough points to win football games. There are many reasons, from inexperienced receivers and injuries to the offensive line, receivers and Aaron Rodgers’ broken thumb.

But one constant on the team is running back Aaron Jones. The UTEP alum has been the best weapon on offense all season. If the Packers want to find success in the final six games, they need to make sure Jones is the focal point of the offense.

Jones is a threat to score anytime he touches the ball. He has the speed and toughness to break tackles and outrun defenders. He often breaks for 10 yards or more and helps keep Green Bay’s offense on schedule by keeping them out of second-, third-and-long situations.

On the season, Jones had 778 yards on 143 carries. That gives him a 5.4-yard average. He also has 40 catches for 248 yards on 49 targets, giving him an impressive 81.6 catch percentage. That leaves Jones with 1,202 yards rushing and 62 catches for 383 yards receiving. Yards and catches were career highs.

The numbers don’t lie. Jones has been effective almost all season, and when he’s at his most effective, so is the offense.

Jones has four games of 100 or more yards rushing this season. The Packers are 3-1 in those games. They are 1-6 in games when he doesn’t top 100 yards in a game.

More importantly, when the Packers give Jones the ball, the offense is more efficient. The Packers are 3-1 when Jones has 15 or more carries in a game. When he has fewer than 10 rushing attempts, the Pack is 0-4.

It makes sense for Jones to get more touches on offense, whether that be on the ground or through the passing attack. One problem with Jones getting more hits is that Rodgers has had accuracy issues throwing the ball to the flat. Most of the time, his attempts at short passes near the sidelines failed, and that was until he injured his thumb in London against the New York Giants.

Rodgers admitted the Packers need to get Jones the ball more for the offense to be successful. “Get him the ball more,” Rodgers said when asked about Jones on The Pat McAfee Show last month. “Whenever there is an L of any kind of challenge, there are always stories that come out of it. It’s easy for us, we need to get the ball to 33 more. By the way, it’s true. Good things happen when he touches the ball. He breaks tackles, he’s probably our toughest guy with the football in his hands.”

Head coach Matt LaFleur also acknowledged that he will need to get Jones the ball more often throughout the season. A good example came after the Packers’ Week 1 loss at Minnesota when Jones barely saw the ball. “Anytime Aaron Jones comes out of a game with eight touchdowns, it’s not enough,” LaFleur admitted after the game.

Despite the citations, LaFleur, who calls the plays, and Rodgers, who often changes the game at the line of scrimmage, often refuse to get Jones’ hands by handing the ball off or passing on long plays. In fact, Jones has only had three catches in one game so far.

The Packers are unlikely to make the playoffs this season. They need to go 5-1 or 6-0 in their remaining games to have a realistic chance of making the postseason. But that doesn’t mean the team can’t spend the last six games of the season figuring out how to make this offense work better. That means giving young receivers like Christian Watson and Romeo Dubs more playing time (when Dubs is healthy enough to play) and finding plays and formations that help maximize the talent on the roster.

However, one thing is clear. Through 11 games, Jones has been the Packers offense’s most consistent and dangerous weapon, and he should be one of the centerpieces of the offense for the rest of this season.